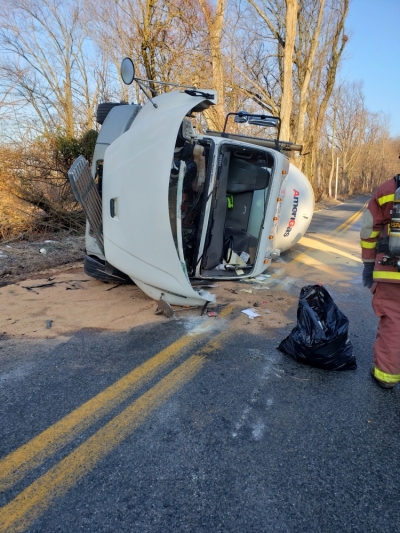 This morning, at 07:27 hours, Station 13 was dispatched to assist Station 18 (Reinholds Fire Company) on a vehicle accident involving a commercial vehicle at the intersection of North Peartown Road an...
➜
Building Dwelling 1A- Assisting Berks County Station 36 (Shillignton)

This morning, at 12:51, Station 13 was dispatched to assist Berks County Station 36 (Shillington) on a Building Dwelling with possible entrapment. Rescue 13 responded with 10 personnel and while enrou...
➜
Vehicle Fire 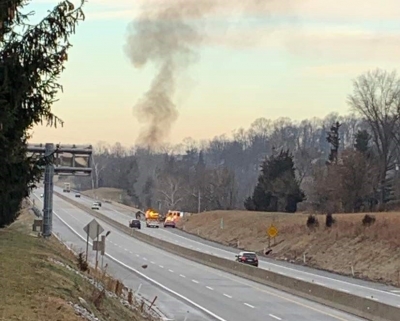 This morning, at 08:18 hours, Station 13 was dispatched to a vehicle fire on the Pennsylvania Turnpike at near mile marker 282.5. Engine 13-1 responded with 7 personnel, quickly followed by Engine 13-...
➜
News headlines
No Bingo For The Next Two Weeks 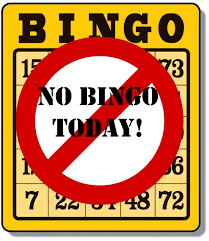 Because everyone could use a friendly reminder, we will NOT be playing Bingo tonight (9/8) and next Thursday (9/15) due to parking lot repair and the Denver Fair. We look forward to seeing you all bac...
➜
3rd Annual Denver Fireman's Food Truck Fair is Taking Place in October! 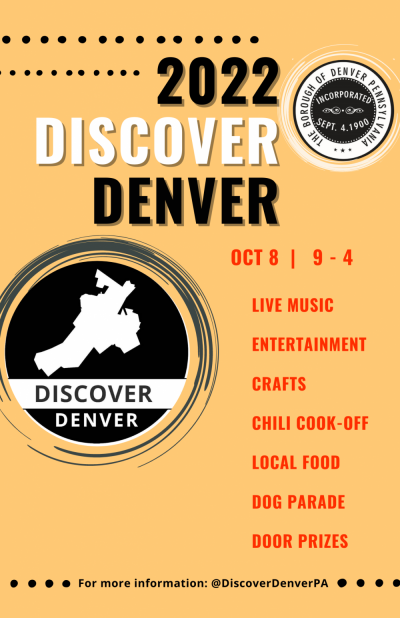 We are happy to announce that this year our Food Truck Fair is being held as a part of the Discover Denver event on October 8th, 2022! Food Trucks will be staged at the Denver Park from 11 pm - 4 pm, ...
➜
2022 Fund Drive In Full Swing! 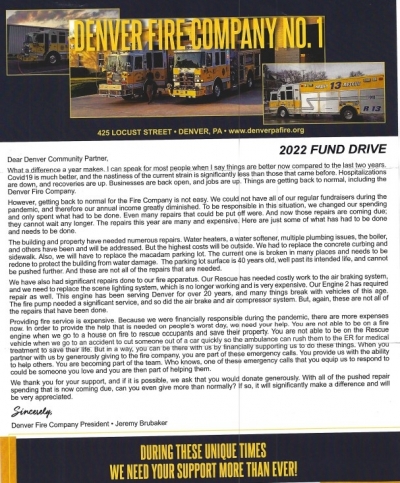 As the residents of Denver Borough have already seen, we have mailed out this years fund drive! While we know that times are tough right now, we would greatly appreciate any amount that you can suppor...
➜
Member Reaches Career Milestone! 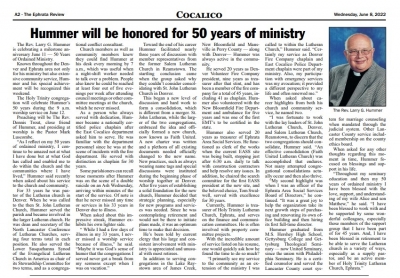 One April evening, over one-hundred years ago, a small group of men sat down at a meeting in the newly incorporated Borough of Denver, Pennsylvania. Their meeting was for the purpose of organizing a volunteer fire company.

At that time, before telephones, automobiles, and mechanical fire-fighting equipment, once a fire started, it was often uncontrollable. Fear of fire and the lack of facilities for controlling it, was in the minds of the borough incorporators in 1900.

The crude method of extinguishing fires, carrying well and creek water great distances, brought people to realize the need for a common water system. They figured the community would have to be incorporated.

So the community was incorporated, and the Borough Council laid plans for a water system. The system was almost completed when the little group of men interested in starting a fire company held its first meeting.

These men laid the foundation for the organization of the fire company. It wasn’t long before others joined them. By the time a charter was drawn up, the company, named Denver Fire Company No. 1, was thirty-six men strong. The charter members were:

The first meetings were held in the office of Dr. W. D. Fink, physician and burgess. Later the company rented and finally bought a building for $1,100 in Railroad Alley, once belonging to Alvin W. Mentzer, known as Mentzer’s Hall.

Other borough organizations also used the building for meetings. At one time Borough Council had a cell installed, so law violators could be locked up overnight before being transported to Lancaster for hearings. In 1915, the men began discussing building a new fire hall.

In 1922, the membership purchased a parcel of land at Fifth and Main Streets and began construction of a $23,000 building, with the firemen doing some of the work in their spare time. The building was dedicated on May 1, 1926, to which the Ladies’ Auxiliary of the fire company helped beautify the new building. The Ladies’ Auxiliary donated substantial sums of money to the  fire company and helped with the interior decorating.

After the fire hall was built, it became the most widely used public building in town – a meeting place for the Borough Council, Lions Club, and Boy Scout Troop. It also became the home of many other temporary and permanent groups, as well as, becoming the scene of many community suppers, lectures, and entertainments. The house siren itself was not only for fires, but to also announce noontime on Saturdays, mock air raids during World War II, and 11 A.M. each Armistice Day.

Plans for remodeling the fire hall started in 1961, followed by plans for building a new fire hall, starting in October 1962. The plans for the new hall were accepted April 13,1964 and the construction of the new fire hall was started in May of 1964.

On February 10, 1965, the fire company moved into the new hall on Locust Street, and dedicated it on June 13, 1965. On December 16, 1968, the note was paid and burned by the Ladies’ Auxiliary and firemen with great pride and joy in our accomplishments, thanking firemen and citizens and industry for their support in achieving this goal.

Since 1965, as in the past, the present facility has been used by various civic organizations, community events and social gatherings.

The Social Hall at the Denver Fire Company is a great place to hold all of your events. The pricing for the social hall is as follows:

There will be an extra $75 fee charged if you are serving alcohol.

This site has been viewed 94,122 times.
Calls
News
Events
Pictures
Apparatus
Maintained by the members and staff of Denver Fire Company. Designated trademarks and brands are the property of their respective owners. Copyright © 2006-2022. YourFirstDue Inc. All Rights Reserved. Content on this web site is supplied by Denver Fire Company. YourFirstDue Inc. cannot be held responsible or liable for any content, text, pictures, or any other media found on this web site.
Management login
Powered by